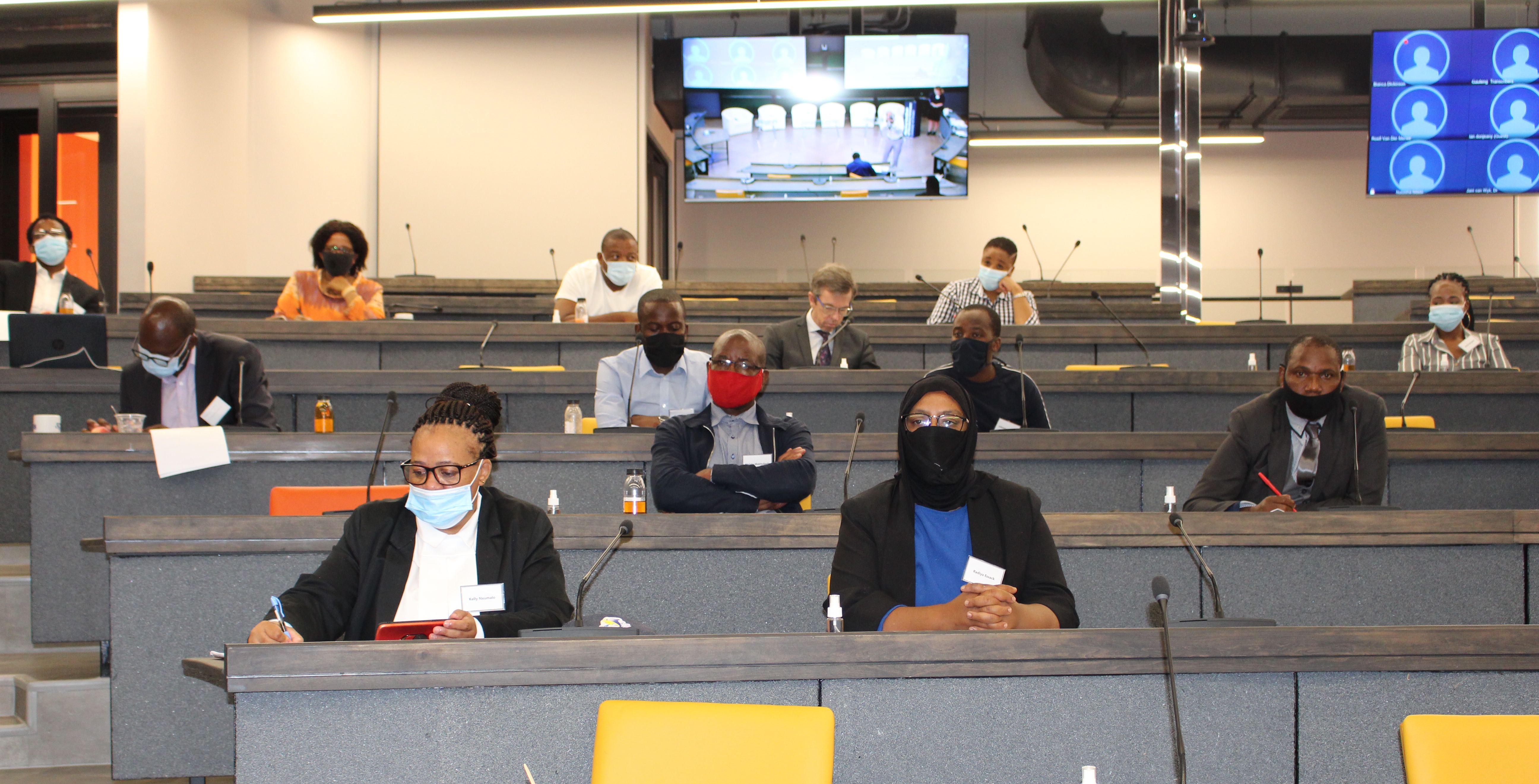 Seminar on legislative shortcomings in implementing the Tribunal’s mandate

The Companies Tribunal (Tribunal) in partnership with the University of Pretoria’s (UP) Department of Mercantile Law hosted a seminar on legislative shortcomings in implementing the Tribunal’s mandate on 5 March 2021 at Gordon’s Institute of Business Science (GIBBS). This was the first seminar where majority of the delegates attended virtually to comply with COVID-19 regulations imposed by the Government. It was aimed at engaging stakeholders on the following:

In opening, Dr Chicktay stated that the majority of South Africans are excluded from access to justice, the Tribunal was established to provide access to justice for those who cannot use or cannot afford the Court processes and the purpose of the seminar is to see where we are as a Tribunal. He further stated that whatever comes out of the seminar will hopefully be used to amend the Legislation for the Tribunal to make effective change that will touch the lives of all South Africans. Prof Munyai concurred with Dr Chicktay and added that for UP, the seminar presents a great opportunity to share their research with members of the Tribunal and all participants from different institutions and sectors. This also provides an opportunity for UP to learn from the Tribunal’s knowledge and experiences gained from day-to-day application of the Act and those lessons will serve to enrich UP’s teaching and research.

Session 1: Practical problems relating to adjudication and the alternative dispute resolution functions of the Companies Tribunal. Chaired by Dr Scott, this session comprised of Dr Labuschagne and Dr Chicktay. Dr Labuschagne highlighted that for the Tribunal’s ADR to be utilised effectively there must be buy-in from the public, majority of commercial disputes are referred to private arbitration. He advised that dispute resolution should be cost effective, fast and ensure that arbitrators are sufficiently independent, trained and knowledgeable. He proposed some of the practical steps that can be taken to improve this process.

Dr Chicktay proposed the introduction of mandatory mediation for the Tribunal to be more effective. He argued that having mandatory mediation will ensure that there are fewer cases in Court and this allows the Court to deal with more complex matters. He dispelled all arguments against mandatory mediation. There was recognition that Section 166 of the Act was poorly drafted e.g. it says that failed certificate should be given where parties are not participating in mediation, conciliation and arbitration, which is not correct because that is not done when it comes to arbitration. The emphasis on the word ‘voluntary’ by the Act was found to be problematic, it was proposed that voluntary should be applicable to the party who wants to refer a matter to the Tribunal and then the other party is bound in. Delegates were informed that despite some challenges with the Act and limited jurisdiction of the Tribunal, Section 166 empowers the Tribunal to handle any company dispute through ADR. It was also proposed that the mandate of the Tribunal should be extended such that BBBEE Commission matters and handled through both adjudication and mediation as opposed to adjudication only. This will decrease the workload of the Courts.

Session 2: Chaired by Dr van Wyk, this session comprised of Prof Delport and Matshego Ramagaga. It discussed administrative powers of the Companies and Intellectual Property Commission (CIPC) regarding reservations of company names, power to order the Companies and Intellectual Property Commission to change names (section 160) and jurisdiction over non-profit companies in terms of section 61(7). Prof Delport started by giving background about the name registration process of the CIPC and the Tribunal’s role in adjudication of name disputes. There were shortcomings identified in relation to Section 11 of the Act. For instance, if there was a registration of a defensive name or a reservation, the Tribunal can order the Commission to either reserve it or not reserve it, or to cancel it.  It does not say anything about the particular registered name of the company.  Section 160 does not give the Tribunal the express power to change a name or to order the CIPC to change a name. Another shortcoming was the fact that the Tribunal does not have enforcement powers in Sub-section 3 (b). If the Tribunal orders a person to change the name and that person does not comply, the Tribunal does not have the power to force him or her or the company to change that name.

On name reservations, there’s confusion around how the CIPC should deal with the applications for reservation of names that appear to be confusingly similar to existing names. For instance, if the name is the same, the CIPC does not register.  If the name is similar, the Act says the CIPC may issue a directive to the owner of that reserved name directing that owner to then notify specified persons who appear to be people that have a potential interest in the name that has since been reserved. Furthermore, the CIPC is not empowered by the Act to reject a reservation of a name that is in its opinion appears to be confusingly similar to an existing name.

There was no clarity whether the Tribunal does have jurisdiction over non-profit companies in terms of section 61(7) and it was established that some NPCs subject themselves to the Act and others do not. This will be clarified in the new Companies Act amendments.

Session 3: Chaired by Dr van Wyk, this was a panel discussion comprised of Prof Boraine, Prof Delport, Dr Scott and Dr Labuschagne. This was a discussion on local and international corporate law developments in relation to Section164 and class rights, Directors’ duties and Business rescue. It was observed that the Courts are enforcing the remedies that are available to directors, prescribed officers, shareholders and all the people who have standing in terms of Section 162 to pursue a remedy for delinquency. The Myeni case was used as an example. It was stated that delinquency applications are brought in to make sure that where there is any gross misconduct or recklessness or abuse of the position of power by a director, then certain people have the opportunity to declare that director as a delinquent.

Session 4: Proposal to introduce a mandatory requirement into the Companies Act to have worker representation on the board of certain companies. Save the best for last! This was the last session which was presented by Prof Michael Katz. Prof Katz gave background about this topic which is informed by the fact that there is wide recognition by experts in academia, business leadership that the duties of directors are no longer confined simply to advancing the interests of shareholders, but to a much larger group of stakeholders. And these include employees, customers, suppliers, the local community and the environment.

Worker representation will ensure that worker’s voice is heard in the highest decision-making body of a company i.e. the corporate Board. However, he stated that this should not apply to small family companies but to all companies who are obliged in terms of the Act and regulations to have a social and ethics committee. He also proposed that the mandatory requirement should be two worker representatives not one. Prof Katz believes that having a worker representative will be the first step in enhancing industrial relations in the country and is a movement towards greater social cohesion.

He made an example of how it has been applied in other jurisdictions and how he proposes it being incorporated into the Companies Act. In England for example, there has now been a corporate governance directive issued by the Department of Trade and Industry that in order to give effect to that, that company must either appoint a non-executive director whose mandate is to look after worker interest or to have a worker director or to have a worker’s working group. It has been found that having worker director in the Board has economic benefits and promotes trust in the company.

In closing the seminar, Dr Chicktay thanked all delegates and the presenters for attending. He stated that their input has been extremely beneficial to the Tribunal and the direction it wants to take with regards to amendments of the law to increase the Tribunal’s mandate so that it is more efficient.